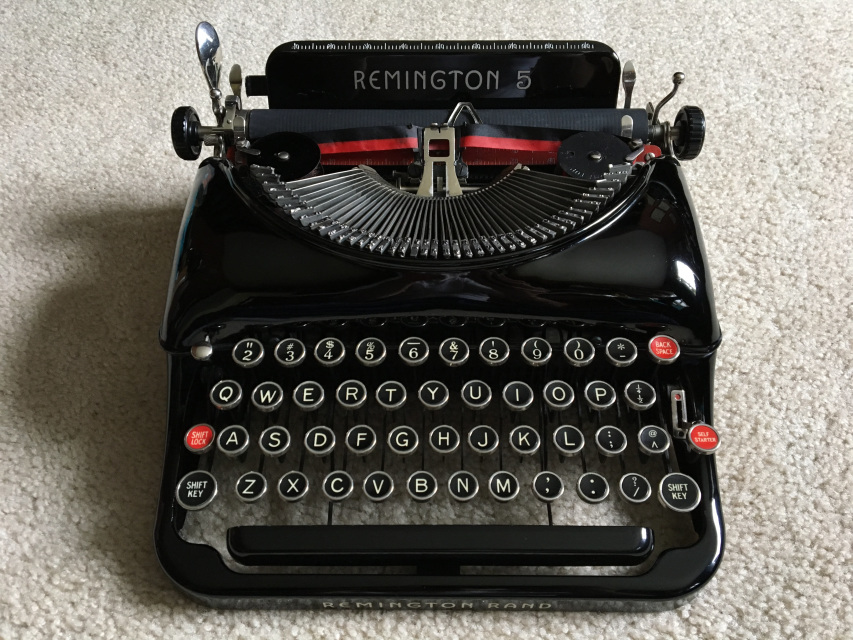 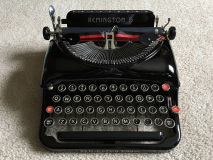 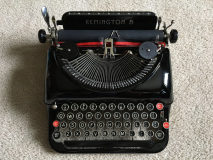 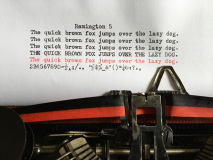 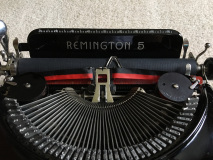 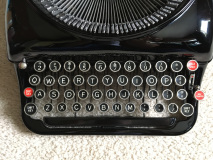 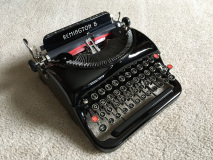 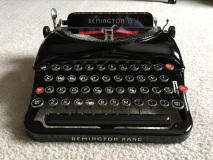 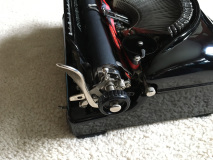 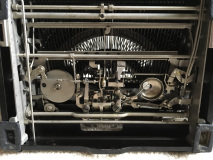 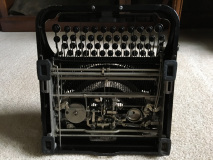 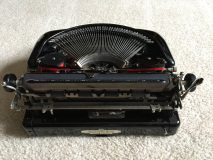 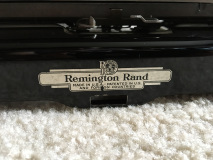 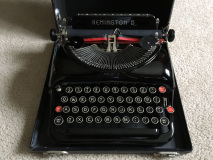 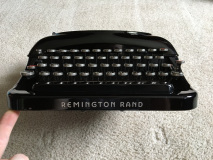 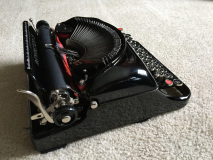 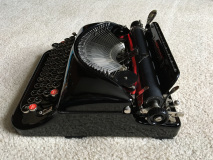 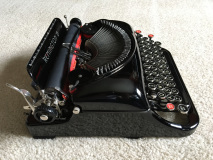 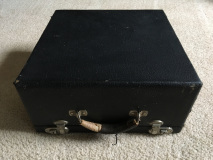 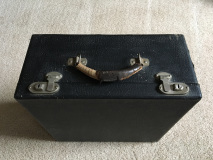 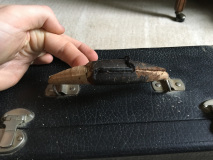 Up for sale is an absolutely stunning Remington Model 5 Streamline which was manufactured in 1937.

This typewriter is mechanically the same as the boxy Model 5, but its body looks quite different: it is an example of the streamlined industrial design of the later Art Deco, or Art Moderne, period. In general, typewriter manufacturers didn't go very far in this trend that was taking other office and kitchen appliances by storm. But the #5 is a tasteful, striking example of typewriter streamlining. The shape was probably created by noted designer Oscar Bruno Bach (to judge from references in a 1940 Time magazine on Bach and his 1957 New York Times obituary, provided to me by Ed Neuert). A company pamphlet says, "The modern attractive lines of this new Remington brings [sic] 20th Century style and grace to the world's most famous portable typewriter ... make it a desirable addition to any home surrounding. Note the big, massive sturdiness of this new Remington Self-starter portable, its graceful lines and glistening finish."

Historically, this typewriter was not affordable for everyone in its time. This machine was manufactured in the height of the Great Depression, and cost almost $900 in today's money ($49.50 adjusted for inflation). At a time where Remington, Royal, Smith-Corona, and other manufacturers were producing "junior" machines with the bare basic minimum features to cut down on manufacturing costs, this typewriter was a full standard portable, and one that was made to look good, type well, and last for years to come.

This specific typewriter only needed a new carriage drawband, a thorough cleaning, and a new ribbon to get it to where it is now. Cosmetically, this typewriter is just about perfect. The glossy black paint shines like a mirror, and the decals are crisp and not worn. The case is a bit worn, including the leather handle, but everything is in-tact and sturdy.

Mechanically, this typewriter is also just about perfect. Despite being from 1937, this typewriter still can be used heavily and frequently, and having a brand new drawband gives assurance that this machine will not need to be repaired for many years to come. Keep in mind that this machine types in the slightly smaller elite font (12 characters per inch rather than the standard 10).

Universal ribbons do not fit this machine, however the original spools can be re-thread easily using ribbon from the universal spools sold on this site. The owner's manual can be found for free here: http://site.xavier.edu/polt/typewriters/RemPort1940.pdf

This typewriter would be an excellent machine for anyone looking for an impressive art-deco era machine in near mint shape that's ready to be used.