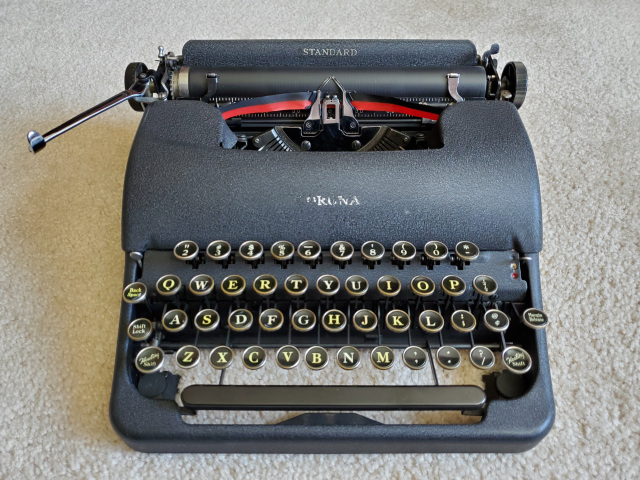 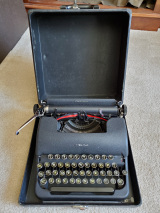 Up for sale is a rather mysterious Corona Standard (3C Series) which was made in America in 1943, potentially for the US Military or another domestic governmental body during WWII. This machine's serial number (3C315033) puts it in the time frame where Smith-Corona halted selling their portables to the public, with all production going to the US military for the war effort, according to the Typewriter Database. See the second picture for reference. Although this machine does not have any labels suggesting it served the military in any capacity, there is still some evidence that this isn't a normal civilian model. To begin, the carriage ends are painted black instead of being chrome. One of the paper guides on the platen is also black, and the other chrome. I'm not sure which one was a replacement from the 'original.' Potentially unrelated, but the 'Corona' label on the typebasket cover is extremely worn- almost completely gone. I'm not sure if there was another temporary label on top of this that was removed or if coincidentally the label is just extremely worn. Nonetheless, as evident by the typewriter database information, this typewriter was not sold to the public after production and may have served the military in some capacity on the home front.

This typewriter is fully functional right down to the bell, and can very much be used heavily and reliably. Cosmetically, as I mentioned, there are some 'flaws,' however they are all a part of this machine's potentially intriguing history. The carrying case shows usual wear with age, but nothing notable.

This typewriter uses universal ribbons which are sold on this site, and the owner's manual can be found here: https://site.xavier.edu/polt/typewriters/SmithCoronaFloatingShift1949.pdf

If you're looking for a machine with some character and that can still be used heavily and reliably, then this is my best recommendation!