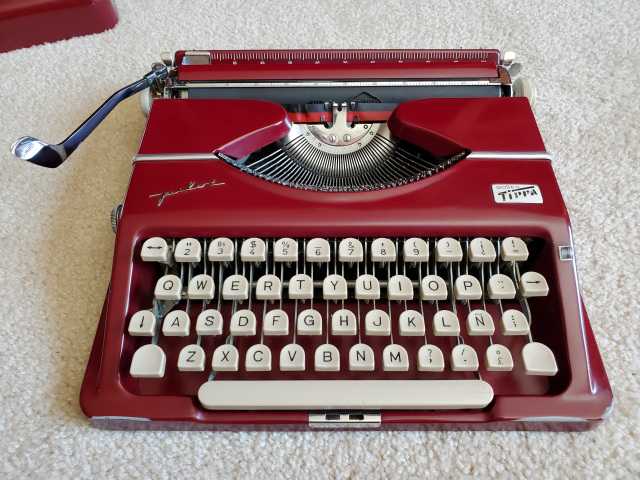 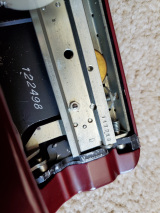 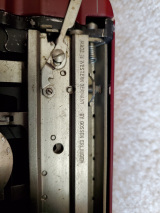 Up for sale is a beautiful and rare Gossen Tippa 'Pilot' which was manufactured in Western Germany in 1954. This typewriter was marketed by Gossen as the 'typewriter in a brief-case,' which is clear by its unique design. The typewriter is ultra slim, alike the Groma Kolibri, but the carrying case has extra compartments for paper, other documents, and spaces for writing utensils or other tools. This model was Gossen's second after returning to typewriter production following WWII, and shortly after this model was manufactured, the rights to their typewriters were sold to Adler. While the quality of the Adler Tippa lineup that followed this machine is still known for being high-quality, it's obvious to all that none of the machines that followed this one were nearly as attractive. This model is also very rare in America- this is the first that I've ever seen in person in my decade of collecting. The lines on this machine are beautiful, as is the dark maroon paint. The lighting for the photos makes the red look a little brighter than it is in some of the pictures, so keep this in mind. More information on this machine can be read here: https://oztypewriter.blogspot.com/2012/01/gossen-tippa-mighty-mouse-of.html

The owner's manual can be accessed here: https://site.xavier.edu/polt/typewriters/GossenTippa.pdf

This particular machine is in excellent shape, and is fully functional down to the bell. The typeface is elite/12 pitch, so its slightly smaller than the standard typeface. Aside from a few scuffs from the folding carriage return lever, the paint is in exceptional condition, and has a nice glossy shine as if it were new. Also keep in mind that this typewriter has a Portuguese keyboard, so it has some special characters and keys but is mostly standard. This typewriter does type in black and red, although I forgot to include the red in the type sample. Unfortunately this machine does not use universal ribbons, but the original metal spools can be re-thread with any universal ribbon when the time comes for a new ribbon. This typewriter has two cases- a red metal lid, which unfortunately does not latch despite my efforts to fix it, and the original leather briefcase-style case which does latch. Also included is two keys for the latches on the 'briefcase' and the original type sample/test from the factory.

If you're looking for an extremely attractive collector's typewriter that can still be used frequently and reliably for years to come, then this is a great investment!