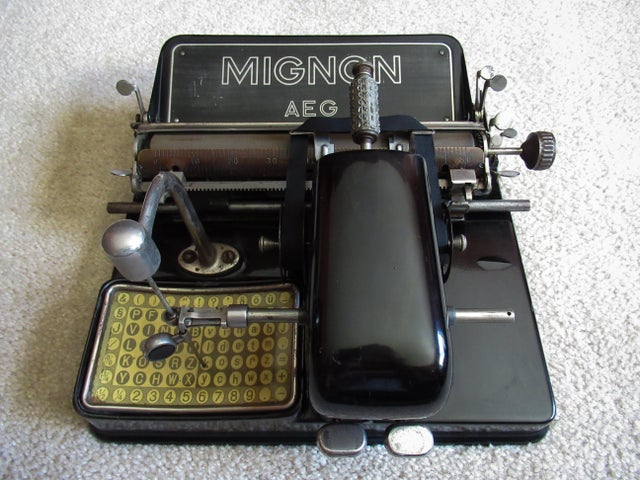 Up for sale is a really unique and fascinating Mignon Model 3 which was made in Germany in 1922. This typewriter was not made for export outside of Germany in the "Mignon" name, and so these are not typically found often here in the USA. This typewriter is referred to as an index typewriter, and so the operation and appearance of this machine is quite a bit different from the typewriters we typically think of. The user of this machine moves a stylus-type indicator needle to the desired character, which in turn is connected by a series of gears and linkages to the type cylinder, which rotates as you move the stylus. Once you have the stylus over the desired character, you press the print key/button firmly and the type cylinder presses down through the ribbon and onto the paper. You can then either hit the space key or move the stylus to the next character to move on and the process continues. The paper feeds exactly like a normal typewriter, although the carriage return process is a bit more complicated.

A lot more on this machine and the history of the Mignon can be read here: https://site.xavier.edu/polt/typewriters/mignon.html

This particular Mignon is in fully functional condition, and still has some life left in the ribbon. What is clearly apparent is that this machine is not something that I would recommend using for heavy use. The typewriter could use a new ribbon (which must be re-thread) if you really do want to torture yourself in using it for small writing tasks, but I really don't recommend it. The keyboard is a rather random and unfamiliar layout (not QWERTY or alphabetical), so finding the right character to move the stylus to is painstakingly slow.

Cosmetically, this machine does show some evidence of aging but is still in great shape. The paint does have some flaws as pictured, but it does mostly shine pretty well. The nickel plated parts do have some pitting or very light surface rust, but nothing is too severe or notable. The platen still feeds paper surprisingly well, but has likely not been recovered anytime recently.

This typewriter also does not have a case or base, which it may not have been sold with originally since it was optional at the time of original purchase.

If you're looking for a really unique and collectible index typewriter that is still very much functional, then this would be a great addition to any typewriter collection! I am only selling this one because I have another Mignon that I purchased at the same time as this one (and I don't have any room for it) otherwise I would be proud to keep it in my collection.