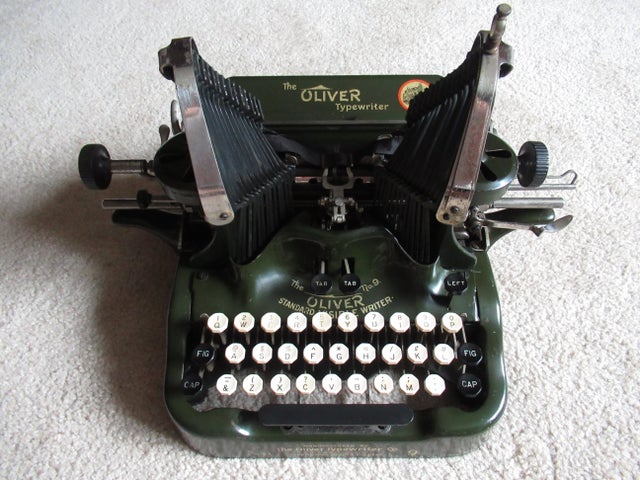 Up for sale is a really nice Oliver No. 9 which was made in Chicago, IL in 1921. No typewriter collection is complete without at least one Oliver. This typewriter is a fairly uncommon Oliver that is actually in functional shape, although it is certainly not a machine that I would recommend for any sort of heavy writing. The original carriage drawband on the Oliver typewriters were no more solid than a shoelace, and so the vast majority of Oliver typewriters are not functional. The batwing design is iconic for Oliver machines, and allowed it to be one of the first 'visible' typewriters, meaning you could see what you were typing as you were typing it. That being said, there were plenty of other visible-writers on the market by the time this machine was produced (which continued until 1928). The Oliver's down-strike mechanism never ended up being as popular as the front-strike mechanism that most of us think of when we imagine typewriters. Oliver typewriters such as this one are a bit clunky. It's not that the mechanism isn't smooth or anything, but the print tends to be a bit more uneven, the ergonomics of the machine as a whole suffer a bit, and the 3 bank keyboard feels very much out of place for a full size desktop typewriter, especially what other options were on the market in 1921.

That being said, this typewriter can still be used as evident by the type sample. The platen and feed rollers work well and were likely replaced not too long ago as they are certainly not 100 years old like the rest of the machine. The carriage drawband was also replaced, although the arresting hook is still present in order to be able to easily remove the carriage. Unfortunately the Tab keys do not seem to do anything. Otherwise, this machine is fully functional in every other aspect. Cosmetically, this typewriter is also pretty impressive for being 100 years old. The original paint does have some scratches and dings, but it is largely in good shape. The labels are also relatively crisp and clear and look great. The nickel plated parts are mostly in good shape, although there are a few areas of light pitting and surface rust on one of the paper arms. Also the ribbon covers are both present, which is more uncommon than you might think!

Universal ribbons certainly don't fit this machine, however you can use any 1/2 inch ribbon (including from the universal ribbons sold on this site) to re-thread the original spindles of the typewriter. The ribbon changing process is a little more complicated than the average typewriter, and so it goes without saying that this wouldn't be the ideal first typewriter for someone. That being said, the owner's manual can be referenced for free here: https://site.xavier.edu/polt/typewriters/oliver9-11.pdf

If you're in the market for a functioning Oliver, then this is a perfect machine for you!

This typewriter, along with other desktops are expensive to ship because of their extremely heavy weight (close to 40-50 pounds in most cases) and the large boxes that they require. If you decide to purchase a desktop typewriter, you can be assured that the expensive shipping costs will ensure that your typewriter arrives safely and in one piece. That being said, if you are local to Southeastern PA, you are welcome to pick this typewriter up and avoid the cost of shipping completely.