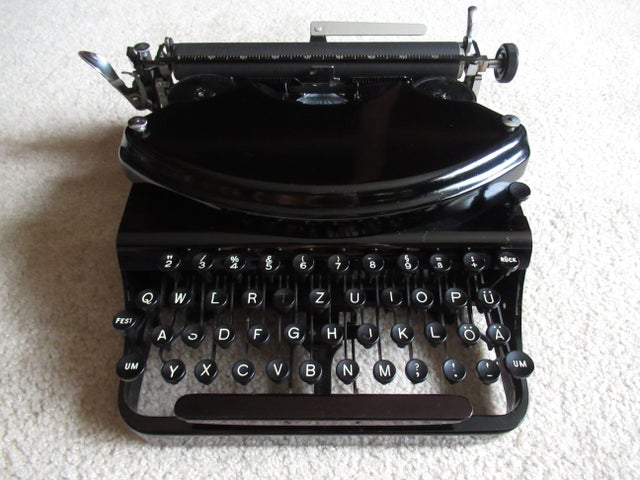 Up for sale is an interesting Adler Model 37 typewriter which was made in Germany in 1941, right before production of Adler typewriters halted until 1946. Production ended in 1941 with serial number 625,000, and this typewriter's serial number is 623,209. This typewriter was not made for export into America, and so it has a German keyboard. Interestingly, this typewriter was likely repainted, as there are no labels or markings anywhere aside from the serial number and "Adler" stenciled into the metal frame near the rear carriage track. Unfortunately I do not have any documentation or provable backstory with this machine, but it is very much possible that this typewriter could have been used in some sort of military capacity in a German office or military headquarters. Another Model 37 made in 1941 (https://typewriterdatabase.com/1941-adler-37.12275.typewriter) was used by the Kriegsmarine (Nazi Germany's navy).

This typewriter interestingly uses a somewhat outdated (for 1941) thrust mechanism.

This typewriter is being sold as-is and in mostly functional shape. Unfortunately, the carriage rack bar has one tooth missing from it around the 4 inch mark, and so the carriage will consistently skip that space as can be seen in the type sample. I have not replaced the ribbon as I have assumed this typewriter will likely not be one that is actually used consistently, however if you wish to do so, the original spools can be easily re-thread with a fresh universal ribbon and it will print clearly compared to in the type sample.

This typewriter would have originally had a carrying case, however this is a rather awkwardly-sized machine in that it is kind of in between a portable and a desktop machine. The entire frame seems to be steel, and so it's pretty heavy for a portable typewriter. That being said, it is not really too large of a typewriter.

Aside from the carriage skipping once per line due to the missing tooth, this typewriter is fully functional and can still be used if you wish!

The paint (although it may not be original- I am not sure), is in great shape overall and largely shines pretty well. The metal is also in great shape and there is no evidence of rust anywhere on this machine.

If only this typewriter could talk, I am sure it would have many stories to tell.